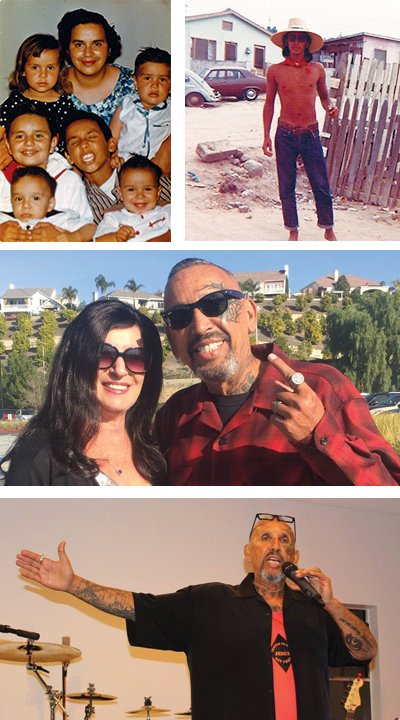 Phil Aguilar has been called many names over the course of his life.
Phil. Pastor Phil. Chief. Chief of Sinners. And, much worse.
.
A descriptor that may fit more than any other is “Tenacious.”
.
In the face of tremendous challenges (some socio-cultural and many self-imposed), Phil founded Set Free Ministries in 1982 and continues to minister to drug addicts, black sheep, and anyone else in need of the Good News he’s been preaching for decades.
.
High school dropout.
Drug user and dealer.
Member of an outlaw motorcycle club.
Married and divorced.
Imprisoned for child abuse.
All before the age of 30.
.
Yet, while incarcerated at Chino State Prison in 1977, Phil chose to follow Jesus through the ministry of Glenn Morrison, and a radical transformation began. Not only did he get married to his girlfriend, Sandra, in prison, but he was soon released and enrolled in Pacific Coast Baptist Bible College. By 1982, Phil determined that the Baptist culture was not a good fit for his passion to reach “street people”, so he rallied a small group of people to launch Set Free Christian Fellowship.
.
Thousands of people attended Set Free in Anaheim, California.
Hundreds of drug addicts were set free in over 5o discipleship homes.
Bikers were drawn to follow Jesus through unique ministries.
Set Free churches were started around the US and even globally.
.
Phil has been no stranger to controversy, but his commitment and dedication to minister to the least, last, and lost continues on.
.
Apostolic pastor.
Street ministry evangelist.
Drug rehab counselor.
Friend of sinners.
Husband. Father. Grandfather.
Tenacious.

Forgive Me Father For I Have Sinned

Biography by Phil Aguilar – Purchase on Amazon
.
Amazon Review: “Pastor Phil and the Set Free church changed my life and brought me to the Lord. This book gave me memories of how awesome those days were gang bangin for Jesus in the Set Free Lowrider Ministry. I went from Gang Bangin to preaching the word Of Jesus and now I am 12 year veteran serving our country on my 4th combat tour. Thank you Pastor Phill and the Set Free church for saving my life when I was young and lost in the world. This book tells the story of Set Free and all the good that it did and went un said and unknown but by only its real members.”